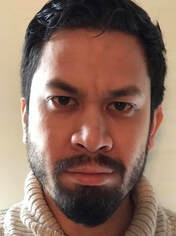 A Message from Mr. Whitney

“Hello! I am thrilled to be the theatre director at Fairfax High School.  For me, theatre has always been a safe space where your friends become your family.  It’s a place where we can laugh or cry, and not feel judged for it.  Theatre helps us see things from perspectives different from our own, and because of that, it teaches us empathy.  It reminds us that we are not alone.
I want to build an inclusive community that is representational of the diversity of the student body.  It’s important that we tell stories that the world needs to hear and start the conversations that are difficult to have.  I would love to have you in my class, or in an after school production.  Whether you are an actor, techie, or designer, everyone has a role.”

Mr. Whitney received his Bachelors of Fine Arts in theatre, with a concentration in acting, from Howard University.  He has acted professionally at the Shakespeare Theatre, Arena Stage, Interact Story Theatre, and other theatres in the DC area.  He taught theatre for the past thirteen years at Warren County High School.  While at Warren County, his program won 6 district titles, 4 regional titles, and advanced on to states four times, finishing as high as 2nd in the state at the Virginia High School League one act competition. His students have won the Virginia Regional Shakespeare competition twice and competed at the National Shakespeare competition at Lincoln Center, New York.  His students have also performed and competed at the Virginia Theatre Association annual conference where they have won awards in acting, play writing, costuming.  He lives with his wife, Beth, their two children, Gabriel and Elise, and their dog, Tucker.